Through Their Eyes: Books by BIPOC Writers 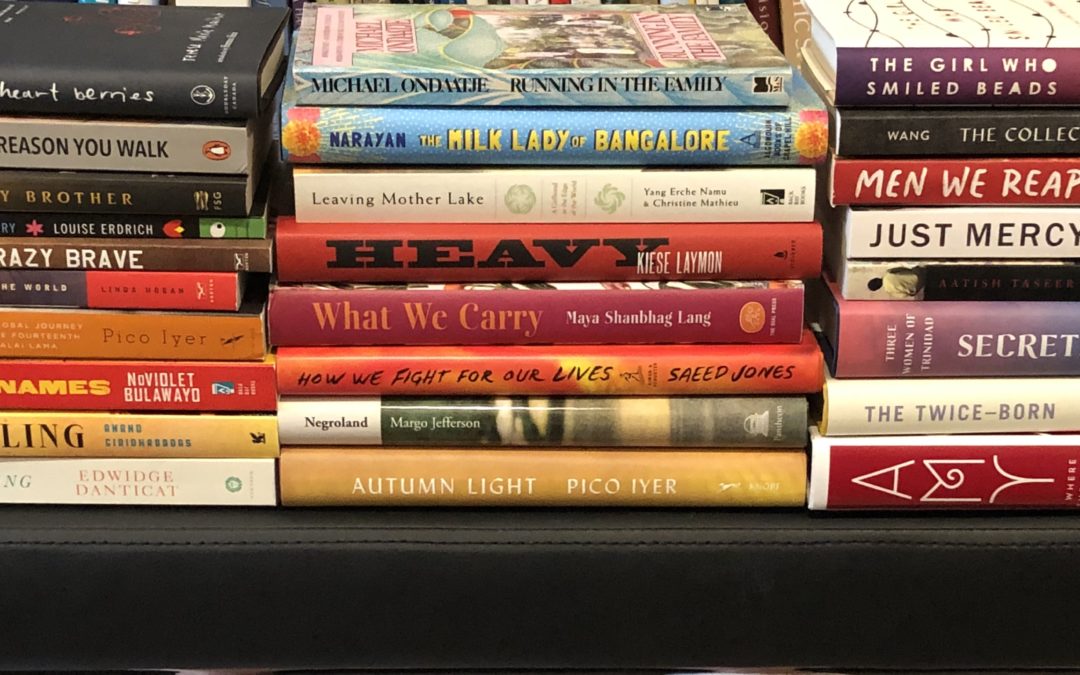 In the U.S., George Floyd, a 46-year-old African American man, was murdered in Minneapolis by a white policeman who handcuffed him and, as Mr. Floyd lay face down on the pavement, jammed his knee into Mr. Floyd’s neck for nine minutes, choking him to death.

The murderer was assisted by three other white police officers, who held Mr. Floyd down as he was being killed. The gruesome event was videotaped by onlookers, as well as caught on the officers’ body cameras.

Protests against the killing of George Floyd, and anti-racist demonstrations have erupted across all 50 United States, and in several countries around the world, including Canada. In a number of cities in the U.S., demonstrators have been met with brutal force by state, local and military police, who have been deliberately targeting and arresting journalists reporting on the demonstrations, among others. The ACLU has filed a class action lawsuit against Minnesota authorities for shooting, gassing and arresting journalists during the protests.

When people have been treated as less than human, denied access to the fundamentals of life: provision and safety, education, healthcare, opportunity, love and belonging…

When entire populations are brutalized, marginalized, enslaved, tortured, fearful for their lives and the lives of their children…

When racism spreads its plague across centuries and continents; when colonizers grow sleek, fat, greedier and ever more egregious in their depredations…

Back in the late 60s I had just moved from Bombay to Calcutta, when riots erupted across the city and the state of West Bengal. They were triggered by extreme income inequality, crushing class and caste-based repression, and an urgent demand for land reform and reform of corrupt local and state governments and police forces.

I woke up on my first morning in the city and watched in disbelief as tanks rolled down the narrow street in front of my hotel, scattering pedestrians and knocking over the stalls of street vendors.

Over the next four years, riots escalated into full-scale class warfare. A Maoist insurgency formed in several adjoining states. The Marxist-Leninist party won a majority in the West Bengal state legislature. Calcutta remained a powder-keg, with ongoing violent confrontations between workers and management, between protestors and police.

This state of extreme terror continued for four years. Thousands died. Millions more were displaced from their homes and livelihoods. I wish I could say that the revolution arrived bearing justice and liberation, but it did not. The rich remained protected in their gated communities. The poor bore the brunt of the effects of ongoing violence.

But…what happened in West Bengal during the four years of the Naxalbari revolution ultimately led to the uprising and revolution that brought down another tyrannical regime – the government of East Pakistan – and gave birth to the nation of Bangladesh.

There is no tidy equivalence between these events and the 400-year legacy of slavery and terror that African Americans live with every day. Racism destroys people, cultures, languages, and, heartbreakingly, human genius and potential. How many African American artists, writers, scientists, historians, geologists, astronauts are lost to our world because African American children receive fewer resources to help them thrive; because African American men and women die in disproportionate numbers from poverty, lack of adequate healthcare, police violence, white supremacist terrorism and more?

How many Indigenous communities and people of colour have had their voices drowned out, their bodies burned, broken, denied, denigrated, stolen, violently assaulted, killed?

Our world is in deep trouble, and we are actively destroying cultures and communities whose wisdom and experience we desperately need.

Ultimately, history teaches us that systemic change is rarely linear and requires ongoing, long-term effort and a variety of concerted approaches and actors to be effective. Elites do not voluntarily relinquish power. Non-violent activism and civil disobedience work as political strategies only when power elites are forced to yield by the social conscience and political will of the majority. In a democratic society, that majority is us. Our voices, our ongoing, everyday actions in support of the most vulnerable in our communities, in support of legislative reforms and public policy initiatives that create change from the ground up, are essential to effect equitable, just and hospitable-to-all societies.

Now is not the time to remain numb and disengaged; neither is it useful to drown in troubled waters. We need to reach for inner strength and sovereignty, clarity and a marrow-deep commitment to justice and liberation for all, especially for our sisters and brothers whose encounters with our justice system reflect the profoundly racist fissures in our societies.

To do this work effectively over the long haul, each of us must understand and honour our capacities and limits, tend to our hearts so we can tend to what matters most.

If you haven’t already begun, now is the time to do the urgent work of parsing inner contradictions and schisms, which ultimately are reflected in societal fragmentation. It’s time to engage in clear political analysis, to understand and begin or continue the lifelong work of uprooting racism, misogyny, classism and colonialism. Time to destroy neoliberal agendas and the depredations of late-stage capitalism.

We cannot be whole when we live in fractured societies, where a vociferous and dangerously self-serving minority establishes the terms by which the majority of us are forced to live.

I know this is hard. Western cultural elites have had a long run of wealth and opportunity, much of it gained at the expense of countries like the one in which I was born and raised. We are unaccustomed to limits; we balk at the word No. We are used to getting what we want when we want it, without considering the true costs of runaway consumption and the distorted values of a violently consumerist society.

Until now, when the internal fissures that run through our national landscapes are yawning wide open – wide enough that we can no longer cover up the terror, brutality and injustice with which communities of colour live every day.

There are many resources available for those of you who want to learn more about how racism, misogyny, classism, and neo-capitalism function to oppress marginalized communities, including communities of colour. Here’s a reading list compiled by Dr. Ibrahim X Kendi, author of How To Be Anti-Racist.

And here’s a brilliant article by one of my favourite writers, Dr. Robin Wall Kimmerer, Indigenous author of Braiding Sweetgrass and Gathering Moss.

Given the deliberate strategies of disinformation that make the truth difficult to discern, I encourage you to revisit the fundamentals of critical thinking. It is incumbent upon each of us to hone our critical thinking skills and learn how to weave them together with intuition and other non-logical modes of discernment so we can sort the wheat from the ever-burgeoning chaff of lies and misinformation with which we are inundated.

Two recent books that you might find useful in this regard are: Thinking Fast and Slow, by Daniel Kahneman, winner of the Nobel Prize in Economics, and Critical Thinking, by Jonathan Haber. Question everything you read or hear. Do your own research. Determine which news outlets are (mostly) reliable and report the news both truthfully and provide in-depth analyses of unfolding events, based on facts and science. Even so, look for confirming reports and analyses from other reliable sources.

For questions related to the Covid19 pandemic, what to do and when to do it, the latest research, the latest data on local outbreaks, check the World Health Organization, and your local health authority for regular updates.

For updates on what’s happening in the U.S., read Heather Cox Richardson’s daily newsletter. She’s a historian who offers a clear and unbiased perspective on the political and socio-economic movements of the day.

The latter will tell you about what’s happening in and to the African American community, and how you can support them and offer ground under their feet. The former will invite you into the beauty, complexity and richness of African American culture, which has managed to survive and thrive despite the worst efforts of white supremacists and everyday racists to destroy all that is good in their communities.

If you’ve read this far you deserve some sort of prize or accolade for sheer doggedness! :-) My home library includes a number of books by writers of color. I’ve collected them over the years because these are among the writers I love best; and also because their world view, experience and expression resonates most closely with my own.

I have gathered a selection of these and photographed them (in somewhat unruly stacks) so you can see them too. Because these are photos of books, and books are physical objects that are relatively unyielding in their shape and size, there were only so many I could include in any one photo. So, this is a collection of photos of a curated selection of books from my personal library. Please note that this is a selection, idiosyncratic and eclectic and by no means comprehensive.

Which gets me to the final point in this post.

Being a writer and a hopelessly-in-love-with-books, lifelong reader, I want to give away 35 e-books to those of you who are committed to reading and sharing them with your friends and colleagues.

If you’re interested, drop your name and email address on this page — which is also where you’ll find photos of the titles on offer — and enter to win one of 35 books.

Let us know the title of the book you want, from the ones in the photos on the entry page. (Sorry, you can’t ask for the newest Harry Potter or the last posthumous volume by Tony Hoagland. It has to be from the selection on offer. Grossly unfair, I know, but I really want to introduce folks I care about — that’s you! — to books I care about, so that’s my not-so-secret motivation behind giving away copies of these books.)

On Monday, June 15th, we’ll pick 35 names at random from the entries we receive and will email the winners to congratulate them. E-books will be sent to the winners using the email address you provide.

Here, I want to introduce a few necessary caveats.

1. Because shipping overseas can be an unreliable nightmare (we’ve tried; we know!) and often costs more than the book being shipped, this offer is for electronic copies only. Much as we loathe Amazon’s predatory business practices and avoid them unless there’s no other alternative available, their Kindle store carries more titles than any other in which e-books are available. So, we’ll send you a Kindle version of the book. You can read it on most e-readers, using the Kindle app. This means we will need your email address — so if you win, Mandy knows where to send you your e-book.

2. This also means that we can only send e-books to countries where your chosen e-book is available through Amazon.

3. My not-so-secret hope is that you’ll fall in love with the book you’ve chosen and will follow your curiosity to discover and read widely in the rich vein of world literature. I also hope you’ll share what you learn from these and other books and the other resources mentioned here, as well as seek out ones that are local to your community. A reader’s mind is a beautiful thing: curious, eager to learn, drunk on story, delighted to burrow into diverse worlds, both real and imaginary.

I wish you a story that nourishes your spirit, lights a fire in your belly and restores wholeness to your heart, my friends. Let’s take exquisite care of ourselves, and profoundly loving care of each other.