by Hiro Boga | Stories From My Journey 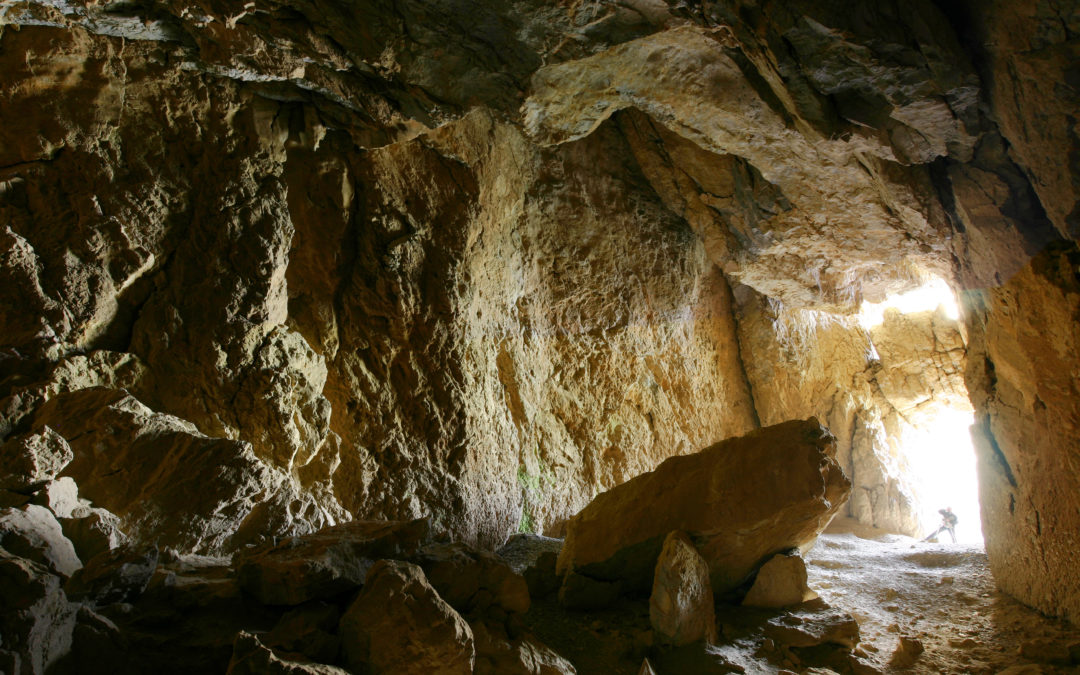 When I first moved to Canada, nearly half a century ago, I lived in a small, lakeside community of (mostly) holiday homes. Across the lake from my house were the jagged brown teeth of a row of cliffs, locally known as Rattlesnake Ridge. This was sagebrush country, hot, arid as old bones.

One day, a friend took me across the lake in his boat — at the time, it was the only way to get to the other shore, which was uninhabited except by rattlesnakes and the occasional coyote.

Clambering out of the boat onto the pebbled shore, I followed my friend up a steep trail to the mouth of a cave halfway up the cliff-face. As our eyes adjusted to the shifting, sliding dark, we found ourselves standing on a wide skirt of a ledge cantilevered over a large, domed cave. A little stream purled beside us, cascading into a small waterfall that pooled into a declivity in the cave floor one level beneath where we were standing.

We scrambled down four rough-hewn stone steps to the larger chamber below. Overhead and on three sides were hundreds of feet of living rock, hard, dense, smelling of earth and iron. In front of us, the cave opened out onto the lake, which shimmered in the afternoon sunlight.

Standing in the cave’s mouth, my friend told me this story.

The cave was an unfinished house, built by a man in his sixties who was once a dentist. He divorced his wife of thirty years, became a kind of hermit, and began building this dwelling using only hand tools that he carried across the lake in his little boat. Chiseling into the rock, digging his burrow.

We are animals, after all.

My friend took an audible breath. “Before he’d finished the house,” my friend said, “he stood right here, not three feet away from where we’re standing, put his shotgun in his mouth, and blew his brains out. No-one knows why. They say he went crazy from the isolation.”

My friend told the story matter-of-factly, as though this were something people did every day.

Stunned, I sat on the floor of the cave, goosebumps rising on my arms, my scalp prickling. I could feel his fugitive presence, this dead-by-his-own-hand ex-dentist. I could feel his grief, his rage, his yearning for freedom, his revulsion for the human species.

He must have thought he could get away from it all. Far from the mess and muddle of humanity. Live the rest of his life on his own terms, free of the minefield of society.

Ah, the relief of finding a place no-one knew existed. Made invisible by a fortress of rock.

And then, anguish of anguishes -— the discovery that he missed people after all. For all his longing for a Robinson Crusoe existence, he needed human voices, human touch, to feed his arid heart.

For a while, the work, the fury, the vision of a solitary life filled with peace kept him going. Long enough to carve out a ledge for a bedroom, a fire-pit beside the pool at the feet of the little waterfall, a rough set of stairs, an even rougher stone shelf for what was clearly the start of a kitchen.

What would drive a man to make these choices? To live with rock and rattlesnakes and a shimmering lake as his only companions?

I’m curious about him, this unknown-to-me man who carved a home for himself out of cliff and stone, not that many years ago. This man who once loved and was loved. Who died by his own hand in his own unfinished cave-dwelling.

I could see him standing right there, looking out over this bright water that lapped gently against an unyielding shore.

Today, nearly a half-century later, I can’t remember the name of the friend who took me to this place, who told me this story. Nor do I remember much more about that day. The scent of sage and sun-burnt rock; broiling heat, the poised stillness of the afternoon; the crunch of our boots on the trail leading up to the cave; the sudden, impenetrable darkness before our eyes adjusted from daylight to cave light.

The story. His story.

His presence. His pain vibrating off the walls of his cave home. His determination. His despair. The work of his hands chiselled into the kind of home that sheltered our ancestors hundreds of thousands of years ago.

He was once a dentist, used to probing the delicate architecture of people’s mouths with fine, hand tools, made to hook around teeth, to explore under gums. Then, he became a builder, chiselling rock into unshakeable shelter.

Today, at age 70, as the world burns and dictators fiddle, I can trace, in my own heart, something of his ambivalence towards the human species — some push-pull that I didn’t really understand when I was still in my twenties. Back then, I was a razor’s edge, a glittering knife-blade separating this from that with unearned confidence in my own discernment. Sharper, in so many ways, than I am now.

But, green and untested as I was back then, I knew more than a little about cave-dwelling. About pain and escape; the sweet nectar of solitude; its ghostly after-taste lingering on the back of my tongue; the strength and protection of igneous rock.

You and I, Mr. ex-dentist, are not so unalike. Though, for my dream escape, I’d choose someplace lush and tropical, draped in bright Bougainville and fragrant jasmine. A snug and sunny bungalow tucked into a hillside with neighbours far enough away that I cannot hear or see them unless I seek them out, but not so far that they can’t stop by for a cup of tea in my garden on a sunny afternoon.

The way your story ended, Mr ex-dentist, I’m guessing it felt like freedom to you — a lemme-outta-here moment that you seized, or that seized you. A moment that extended into eternity, when freedom became isolation, a dead bird in the hand and not a bush in sight.

You had to have planned it — your death, I mean. You weren’t yet living in the cave. You had to have brought the shotgun with you, in your boat, so you could end your dream right where it first took shape under your hand. The same hand that pulled the trigger that ended your life.

I don’t know you, but I feel you. I’m deeply sorry you felt so alone. That the beauty of this world was not enough to console you for the losses you’d suffered.

Or, maybe you didn’t feel alone at all. Maybe you chose your death the way you chose to build your cave-home — in your own way, in your own timing.

What do I know? I’m projecting my own movie on the walls of your cave, Mr. ex-dentist. I’m a story-finder, a storyteller. And your story has a narrative arc, even if it’s a discontinuous one.

As I listen for your lingering presence, I’m shaping sense impressions from decades ago into a cradle, a shroud to gather up and hold the pieces of your blown-apart heart. I’m cradling a story that reveals and holds my own shifting frailties.

Typing this on my tiny iPhone at 11 at night, safe in the sanctuary of my bed, I’m becoming amorphous; I’m becoming that afternoon, that place, your presence, Mr ex-dentist. I’m inhaling the mist of your bitter breath infused into rock.

You call to me across layers of time and history, the enigma of your life a story I enter with care, with reverence. Barefoot and naked-hearted, I call back to you across the detritus of the years.

You have lingered in my memory through a lifetime of listening, of finding more than I ever sought.

Wherever you are now, I trust you’ve found the peace that eluded you in your once-upon-a-time. I trust you’ve made shelter and belonging, a place for your heart to rest.