What I Learned About Business From Crossing The Road In Bombay 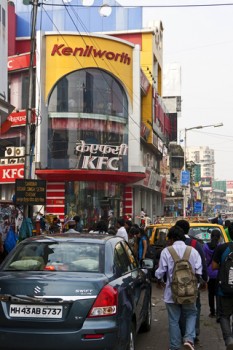 As some of you know, I grew up in Bombay, back when it was a relatively small city of about eight million people. Crossing the road — any road — was both high adventure and low comedy; the kind that leaves you breathless, with an ache under your ribs. Heart pounding with shaky gratitude at having made it across, alive.

Imagine that you’re walking to the bus stop along roads crammed with crazed taxi-drivers, honking horns, a million bicycles and motor scooters, cars belching oily smoke, handcarts piled high with teetering loads, faded red public buses with riders clinging to the roof and hanging from every door, pedestrians, trucks, beggars, thieves, and hawkers shouting their wares in half a dozen incomprehensible languages.

Imagine, too, an obstacle course of potholes big enough to swallow a car. A swamp of feces and other unidentifiable detritus squishing fetidly underfoot. Dog turds, cow dung, horse manure, garbage, gobs of spit and human waste ripening democratically under the tropical sun.

Now add dead rats, stray dogs, families camped out by the side of the road in makeshift shanties cobbled together from flattened tin cans and battered sheets of cardboard.

Throw in a small shrine of fruit and flowers under a dusty banyan tree. Some trucks rigged with loudspeakers blaring political slogans as they roar by. Old men drinking cups of tea and gossiping under the shade of a roadside tea stall. A couple of skinny sacred cows ambling from shop to shop, being fed banana leaves and bits of coconut.

Mix in pedestrians — several hundred thousand of them on this one road, heading in every direction. Women carrying impossible loads balanced on their stately heads. Naked, big-bellied kids playing, shrieking with laughter, in and among the crowds. Holy men with ash-smeared foreheads and fiery eyes making their way serenely through the chaos.

And then, you see the bus stop. It’s on the other side of the road.

You stand at the crumbling curb, a torrent of sewage gurgling sluggishly through the open gutter near your feet. You see the bus coming.

The Greeks had Chiron to row them cross the River Styx. You have — only yourself.

In that instant, you become aware of patterns in the chaos. You anticipate a slight opening in the thunderous traffic, a traffic light– often a mere suggestion, in these parts — turning red up ahead. The bus gears up noisily from its previous stop a couple of blocks away. It’s now or never.

You commend your soul to the gods, and step out into the road.

Your awareness expands outward to take in the flow of traffic, the patterns of movement, of closing and opening, the milling pedestrians, the cacophony pressing in from every side. You can’t calculate the odds — there are too many of them, and they are too unpredictable. So you rely on senses that go beyond the merely physical.

You swim through the swarm as if through a river, sidestepping feces underfoot, turning a shoulder this way to slide past that burly turbaned man to your left, bending at the waist and twisting sideways to avoid the load of bamboo balanced precariously on someone’s head.

You don’t run. You walk briskly, with trust, with confidence. Not because that river of honking cars and trucks will stop for you — it won’t — but because you know that, having committed yourself to this course, there’s nothing for it but to trust the gods to get you to the other side. Safely. Without ick on your shoes.

I recommend a trip to Bombay for anyone who wants to live an entrepreneurial life.

Cross the road, any road, while you’re there. You’ll develop skills of discernment, vision, goal-setting, perseverance, faith, and the ability to look death or dismemberment in the face without flinching or running away.

Oh — and you’ll have great stories to tell when you return.