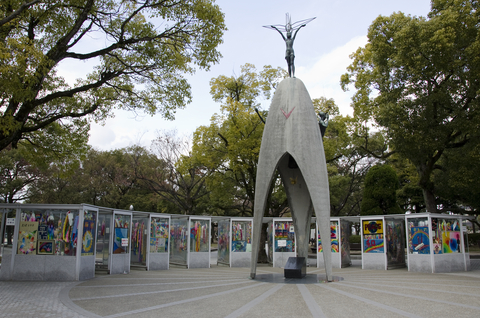 On August 6th, 1945, the world’s first atomic bomb was dropped on Hiroshima. An estimated 140,000 people died in the aftermath. Today, the city of Hiroshima leads the movement for world peace. I am proud to be named for this city, which has transformed a legacy of unimaginable suffering into the ongoing work of peace-making. This is my tribute to Hiroshima; to those who died in the world’s first nuclear holocaust, and to those who live there today.

I was born in Bombay in 1949; four years after the world’s first atomic bomb devastated Hiroshima. My mother was getting dressed to go for a walk with her sister, my aunt Amy. Before she had finished putting on her sari, I arrived.

My aunt, who was a physician, delivered me into the world on my parents’ four-poster bed. Afterward, she said with a laugh: “This baby came out like an atom bomb. Let’s name her Hiroshima!”

She was joking, of course. My aunt was a happy, sunny, woman who loved to laugh. My father was a socialist, and the devastation of Hiroshima was one of the defining events of his life as it was for so many others. He named me Hiroshima. Years later, when I asked him why, he said: “So what happened there will be remembered.”

For most of my childhood, my name was a boulder in my small belly. Nobody knew how to pronounce it. And no-one else had a name that carried such a weight of death and destruction.

More than eighty thousand people died in Hiroshima that morning of August 6th, 1945. Many thousands more died of radiation poisoning in the years that followed.

I carried this knowledge inside me like a secret.

When I was ten years old, I won an international essay contest co-sponsored by UNESCO, the Japan-India Friendship Foundation, and the Japanese newspaper, Yomiuri Shimbun. In my essay, I wrote about my name — for the first time, I wrote about what it meant to me.

That October, accompanied by an escort, I flew to Tokyo for a month-long tour of Japan, as the UN’s child ambassador.

We spent the first two weeks in Tokyo, and made brief visits to Nikko, Osaka, and Kyoto. Because this was an “official” trip, there were banquets and television cameras, media interviews, ribbon cuttings and visits to schools every day.

And there were many awkward, tender, painful moments.

Everywhere we went, people heard my name and broke down in tears. Most people we met had lost someone they loved in the holocaust that was Hiroshima.

In the third week of our stay, we finally flew to Hiroshima. As the plane began its descent, I peered through the small window, expecting to see a moonscape, bleak and sere. Shockingly, I saw a city like any other — as modern and faceless as Tokyo.

The skyline bristled with tall, boxy buildings. The streets were laid out in a neat grid and teemed with traffic. The only intimation that this was a landscape destroyed by the world’s first atomic bomb fifteen years earlier was a tangle of blackened steel girders which, from the air, looked like a giant sculptured rose.

This was ground zero — the exact spot above which the atom bomb had exploded.

Everything else seemed to have been cleaned up and rebuilt so completely, it was hard to believe there had ever been a nuclear conflagration here.

We landed at a modern airport and were driven through busy streets to a beautiful, Japanese-style hotel.

A hundred thousand people died here, I reminded myself, as we walked through the elegant lobby. But the face of Hiroshima I saw that morning was the face of a porcelain doll, smooth and flawless.

Later that day, we were taken to visit the A-bomb hospital. There, I met a young girl who looked about my age. Our interpreter told me she was much older. Her body, covered in purplish-red keloids, had stayed as small as she’d been in 1945, when the radiation seared her and left her with the cancerous growths that made it impossible for her to lie in a bed. She slept, ate and lived in a woven hammock in her hospital room.

And she made paper cranes, for peace.

The cranes hung from the ceiling of her room, beautiful birds in rainbow colours, poised on the brink of flight.

I no longer remember that girl’s name, but I remember her eyes, their bright darkness. I remember her hands, small and gnarled, which created such beauty, the illusion of space and air and freedom.

When we returned to our hotel that afternoon, I went straight to bed. And slept, dreamlessly, until my escort woke me hours later for dinner with the mayor.

On our last day in Hiroshima, we were driven out to the Peace Memorial Cenotaph, where I was to give a speech to several hundred school children.

The memorial is a graceful concrete arch. It shelters a black stone cenotaph on which are inscribed the names of those who died in the bombing. On the face of the cenotaph is an inscription in Japanese. Our interpreter translated: “Let all the souls here rest in peace. We shall repeat this evil no more.”

A little while later, he led me up a flight of small wooden stairs to a podium. A microphone was lowered in front of me. Solemn, moon-faced Japanese kids stood in tidy rows, their dark eyes fixed on mine.

I said moshi-moshi, and the children bowed and smiled — beautiful gap-toothed smiles. Shining eyes. Shining black hair. There was clapping.

Until that moment, I hadn’t known what I would say. But as I looked at those bright faces, a crane opened its wings in my heart.

I spoke of what it meant to me to be in the place that was my namesake. How I had imagined it for so many years, growing up thousands of miles away in Bombay. How, in my dreams, I had heard people dying. People screaming and begging for mercy, for water. For an end to their pain.

Until I came to Hiroshima, I hadn’t understood those childhood dreams. I’d woken up many nights with my heart pounding, feeling a desperate need to help somehow. Not knowing who those people were.

Now, here they were — the very people who had survived those nightmares. My heart was full. These were the people who had lost everything they loved. Who had forged a monument to peace in the crucible of the fire.

The Japanese translator faltered, a few times, as I spoke. His translation seemed to get briefer, his voice became a slender thread that stretched out behind mine, and then broke. I turned to him, shaken out of my trance. Tears glimmered on his cheeks.

My own face was wet too.

There was a long silence.

Then the adults whispered to the kids. The children sang Sakura in clear, high voices. The Cherry Blossom Song.

Two solemn-faced kindergarteners walked up the steps to the podium with their teacher. All three of them bowed, and presented me with an exquisite Japanese doll in a glass-fronted wooden box. The doll’s porcelain face was delicately tinted, smooth as ivory. She wore a brilliant red kimono, with a black and gold obi and wood-soled sandals. The box was so heavy, I had to brace it against the podium to hold onto it.

I bowed too, and thanked them, and then waved goodbye. My interpreter took the doll from my arms and helped me down the podium steps.

The adults were waiting in an orderly line. Each one in turn bowed low, then spoke. The interpreter translated. Their faces were naked, grieving, as they told me their stories.

“My wife was pregnant with our third child. When the black rain came, she ran with the children to the sea. I went to work early that day, I didn’t say goodbye. One of my neighbours told me later how it was — they boiled in the water. The skin and flesh boiled off their bones. Nothing remained.”

“My son’s shadow was burnt onto the wall of our house. That is all that was left of him, a piece of wall; his shadow.”

“My niece is still alive, in the A-Bomb Hospital. She was a child when the bomb fell. Her body is covered in keloids. For fifteen years she has slept in a sling in that hospital room. You must come and see her.

All day, she makes paper cranes. For peace. To bring peace to the world.”