A Horizon of Broken Stones 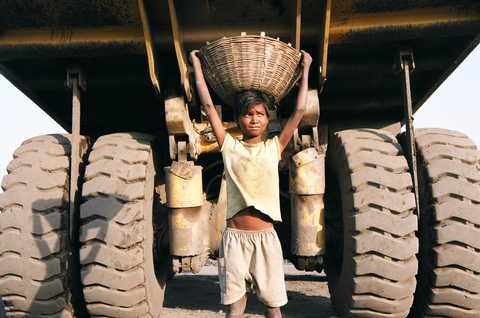 Some years ago, I spent two weeks at an Ayurvedic resort in the mountains near Pune, in Western India. The resort overlooked a clear blue lake, set like a jewel in a bowl of scrubby hills the color of deer-hide. The nearest town was a couple of hours drive away, along a single, bumpy, winding road.

After a fortnight of exquisite, healing silence — no ringing phones, no tv or radio. Just the chirping of crickets at night; the chatter and laughter of the staff near the central building that housed the kitchen and offices — my friend and I went for a walk down the dusty road to a makeshift encampment below, where a ragged road-crew was hard at work rebuilding a portion of the road that had washed away the previous monsoon.

Several families lived by the side of the road in little shanties cobbled together out of sticks and branches; bits of frayed, sun-bleached cloth; sheets of tin hammered out from old oil drums, their colored logos scratched and dented but still visible.

The men did the heavy work — hauling boulders onto the work site in hand-carts, loading and unloading the idling truck that spewed fumes into the mountain air, manning the machine that spread hot tar onto the prepared road bed.

The women carried rocks in shallow metal basins balanced on their heads. Some of them cooked over open fires, yelled at toddlers to get out of the way of heavy machinery, wiped the runny noses of babies slung across their hips.

And then, there were the children, bent over like little elves, smashing rocks into smaller pieces to be loaded onto the idling lorry, which would haul them down the road where the men would spread the crushed rock onto the red laterite mud to make a new road bed.

These kids ranged in age from two or three to eight or ten — it’s hard to tell how old they were because malnutrition keeps them small and and the relentless sun under which they worked all day had wizened their skin to leather.

We stopped to chat with them. My friend, who lives in Pune, translated. The kids gathered around us, chattering excitedly as they bit into the snacks and sweets we’d brought them from the tiny roadside shop a couple of miles away.

We asked them the usual questions. They answered, as kids do — vague about the things that matter more to grownups than to children; clear and forthright about what’s vivid to them.

No, they did not go to school. Their parents moved around the country, going wherever the work was, so they never stayed in one place long enough to go to school. Besides, one of them said proudly, they were needed. Their families depended on their labor, for food and shelter from the rain.

What did they want to be when they grew up, we asked.

There was a moment’s pensive silence. Then, a chorus of high-pitched voices: “To be a stone-breaker!” “I want to be the fastest, bestest stone-breaker”, said one green-eyed beauty, shyly.

“Stone-breaker! Stone breaker!” they called, excited to be asked; delighted to have a calling of their own.

Then a young man in ragged yellow shorts — all of six years old; clearly the leader of the pack — yelled out loud: “I’m not going to be a stone breaker! I’m going to be the man who drives the lorry that carries the broken stones!”

His voice was triumphant; his dusty face glowed. The children fell silent, and looked at him with something like wonder.

This young man’s vision for himself was more expansive than anything these children — or anyone in their families — had ever dreamed of.

And, it emerged from the Land of Broken Stones. Its horizon was circumscribed by stones: breaking them; transporting them; building roads with them. That was their world. That was who they believed themselves to be.

We left them with sticky hugs and bottles of cold, orange Fanta. Tears (mine). Happy waves and calls of “Bye-bye!”

The next day, I was taking a train back to Bombay, then a flight home to Canada. My friend promised to connect with an NGO in Pune, who she said would send someone out to get these kids into the village school; would bring along a mobile medic to check and treat them for ringworm and rickets.

This morning, I woke up thinking about those children. And about the ways in which our identity is shaped by the world we know. Until we discover who we truly are, and discover our power to shape our own horizons.

Who do you believe yourself to be? What is your horizon of Broken Stones? What lies beyond it — beyond the limits of your imagination?